The International Conference named «Church and NGOs for environmental education in national parks» https://www.iers.org.ua/en/conference-church-and-ngos-for-environmental-education-in-national-parks/ was held from the 3rd  to 5th of November at the Visit center of Synevyr NNP. On the 3rd of November, 2021 IERS staff met German guests and partners at the NNP (the National Nature Park). The guests had an opportunity to visit the unique floating museum, which is located at the Visit-center. They got acquainted with the models of units, structures, and devices of the whole technological process of harvesting, sorting, storage, and transportation of wood in the form of side floats in the museum of timber floating, In an accessible, visual form the leading experts Fedir Matichyn and Yuriy Babichyn of “Synevyr” NNP acquainted the guests with the information about the history and life of our ancestors,  hard work of Bokorashes, and the difficult fate of their families, demonstrated different axes, saws used in various areas of harvesting and processing wood. From costumes and tools  to the layout of the hut called kolyba (a temporary housing for loggers) – all this was exhibited in the museum. After that, a master class on wool weaving was conducted  by Mrs. Lyubov Hrechyn  who presented woolen socks to the guests as souvenirs. This is how the first day of the German guests’ stay in the Carpathians ended. Everyone was satisfied and looked forward to the start of the conference with impatience. The next day  the opening ceremony of the international conference was held where welcoming words were made by: 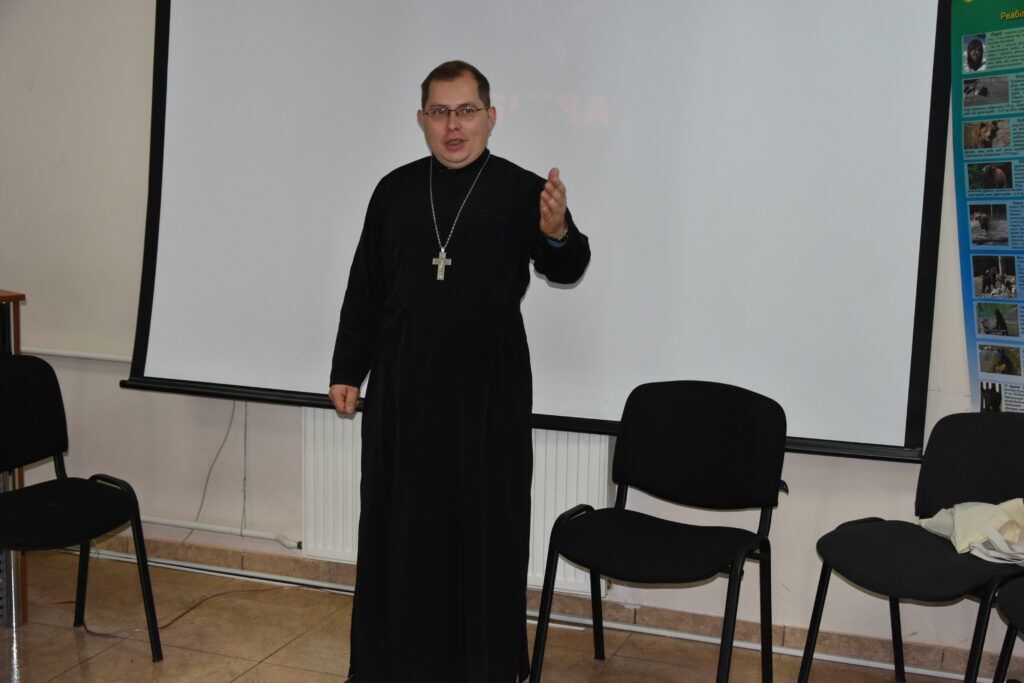 Ruslan Tkachuk, a representative of the Religious Organization “Spiritual Administration of Muslims of Ukraine” also congratulated everyone on the opening of the conference and took an active part in the conference. After warm welcoming, the participants had presentations of such project applications as:

Interreligious Council for Carpathians Nature Preservation and Public Council under the Ministry of Environmental Protection of Ukraine as the important result of cooperation with NABU (Kirchenproject), DBU, LMU, Alexander Bokotey (IERS/IRCEF) Later, all the participants had an opportunity to visit a wonderful and unforgettable  place like the Pishkonya mountain range. Pishkonya is an interesting combination of thick virgin forests and open meadows. All the participants were impressed by the beauty and specificity of this place  but  I would like  to mention one more wonder – the Wild Lake.

Thanks to the leading expert Yuriy Babichyn, the participants learned out that this lake has a volcanic origin and is 9 metres deep. It is hidden in a dense forest and is surrounded by majestic spruces. Every year the lake becomes more and more swampy, gradually covered with water lilies, and this process goes both from the shores and the island. That’s    so in reality because there is also a floating island covered with moss, grass and single short fir -trees. All this together creates an extraordinary beauty of the landscape among the wild, dense forest with thick trunks of spruce. Afterwards, the conference participants visited the only forest and floating museum in Europe which is located near the lake on the Black River. It is a miracle object that has no analogues in the world – a magnificent hydraulic structure of the XIX  century, built on water. It was used to float wood bound in daraby  (floats). In ancient times  the forest was one of the main crafts of the population. Unfortunately, the floods of 1998 and 2000 caused great damage to the museum, but nevertheless, the museum is functioning nowadays and always waiting for visitors. At the end of the first day all participants together with German guests tasted the traditional dishes of Transcarpathia.

The 5th of November – the second day of the conference began, which was no less interesting, unforgettable and energetic. Such project presentations were demonstrated:

“Green Parish” as a logical outcome of the result of the parishes’ movement for Carpathians Nature Preservation (Mykhailo Bilanych, IRCEF) The round table of the experience exchange and ecologically education activities on the territories of the Carpathian Natural Reserve Fund was held under the supervision of German leading expert Ivan Tymofeiev. The second part was practical, namely a visit to the brown bear rehabilitation center, where Yuriy Babichyn told a lot of informative things and demonstrated how to behave when meeting a bear. It should be noted that the brown bear population in Ukraine is about 300 individuals, and the purpose of the center is to rehabilitate brown bears who have suffered abuse, and who are victims of natural disasters kept as confiscated animals.  Their further fate is considered in court because of violation of Ukrainian laws for reproducing  their natural population, temporarily detent animals detained at the border due to violations of environmental legislation, etc. At the end of the conference, the participants went for a walk to the Lake Synevyr where they had an opportunity to exchange emotions and views about it. Many thanks to the translators Vladyslav Yurosh and Natalia Makhonina, who made a significant contribution to the organization and work of the conference and made this process much easier. Despite the rainy weather, guests and partners from Germany returned home with pleasant memories and emotions about fantastic places like the Carpathian Mountains and Synevyr NNP. They promised to return to Transcarpathia again and remained optimistic about the implementation of future project ideas.

Innovative methods of ecological education and awareness for teachers and tutors